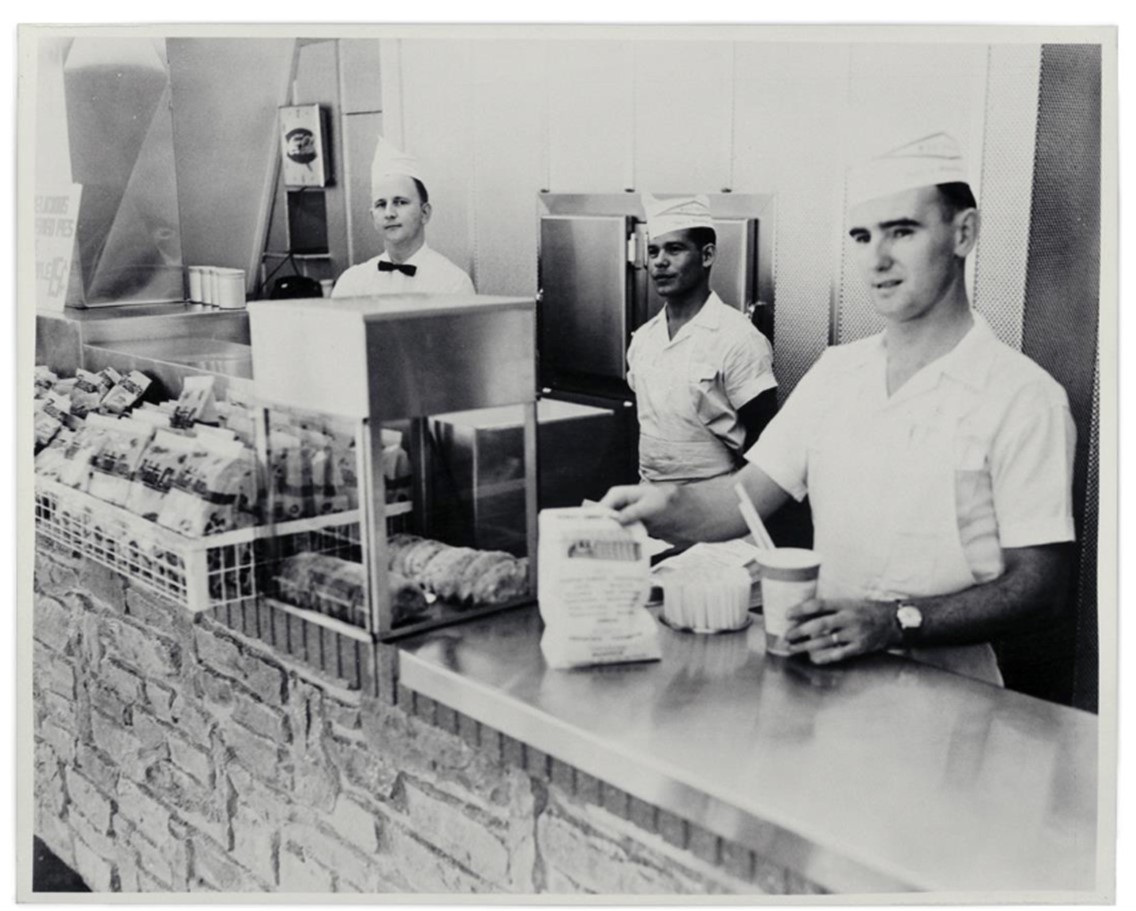 How a Mirador resident benefited the growth of a Texas staple

There are a few things that Texans might agree serve as symbols for the Lone Star State: bluebonnets, pecans, mockingbirds, longhorn steer, armadillo, a  yellow rose, and a big juicy Whataburger. The founder of the Whataburger franchise, Harmon Dobson, was a Corpus Christi local who dreamt of serving a burger so big that it would take two hands to eat it. But that’s not all, when they tasted it, he wanted it to be so tasty that they would be compelled to exclaim, “What a burger!” The first location was erected in the year 1950 on Ayers Street in Corpus Christi, later to expand to 800 locations in multiple states. Along the way, the burger chain seemed to burrow deep into the hearts of Texans becoming a source of pride for the state.

In 1954, an intriguing employment ad was placed in Dublin’s newspaper calling for “ambitious and reliable” applicants who wanted to earn $400 per month. Dobson was seeking talented Ireland natives to come to America and help him expand this double-handed burger idea. Having spent his whole life in  Ireland, an island that is 170 miles wide and only 302 miles long, comparatively the size of the state of Indiana, Alan Stoner knew there were career limits within his home country. Besides, as a grown man of 19 years, Stoner had given his heart to Mamie, a local girl down the road that he intended to marry. Therefore, finding a good paying job was paramount if he intended to win her hand in marriage. Stoner was counting on the promise behind this American ad to be his ticket to making a good life that would be suitable for he and Mamie. There was only one problem, the ad specified that only those 21 and older could apply.

Undeterred, Stoner moved forward with the application, allowing himself this one little fib to secure a future for he and his sweetheart. Soon enough, Stoner learned that he would be invited to join the Whataburger team in Corpus Christi, Texas. Stoner would be the first of many who would leave their native country to work for the Texas Giant.

Carrying only a gym bag with a couple of shirts and pants, along with a shaving kit, Stoner was whisked off to his new adventure. While Stoner is said to have been the first to answer the ad in the Irish publication, he was joined by roughly a dozen other Irish hopefuls. After six weeks of training at the original Corpus Christi location, Stoner moved to McAllen to open store “#7” which was originally a Dairy Queen.

Stoner shared that Harmon was an inspiring leader who demanded excellence and expected workers to take orders without writing anything down explaining that you should, “have your business in your head and your head in your business.” The company was known for leading in strategies not yet explored by the fast food industry. For example, as an engineer, Dobson designed the kitchen for maximum efficiency so that the person working the grill could find all necessary tools within reach, negating the need to take any steps at all.

After working tirelessly for Dobson for two years, Stoner was able to go back to Ireland in 1956 to marry Mamie and bring her back to America with him. Alan Stoner Jr., the couple’s son, reflects on what that moment must have been like for his young mother, “I imagine mom, a young girl who had never left Ireland, looking out the window as they passed through Texas thinking, ‘what have I done?!’”

In time, the couple would add four children to their growing Texas family; Alan Patrick, Mary, Paul and James. “Our sweet Mom never complained and adapted well to a new life in Texas,” recalled Mary, the couples only daughter. It’s clear after taking a look at the Stoner’s life, not only did Mamie adjust well to her new surroundings, she helped the entire family thrive. Mamie was the backbone for the family, supporting her children’s growth and development, while also supporting her husband’s career aspirations. Stoner gives his loving bride much of the credit for his successes recalling how she would often save the day if the restaurant was in a pinch and was running short on buns for example, “without complaint, she’d put the buns in the front, the kids in the back and come on down, whatever time of day or night.”

With Mamie by his side, it wasn’t long before Stoner would become a key  player in the company’s growth. He opened another store in McAllen (#23) and yet another one in Weslaco (#26) before he was promoted to the General Manager of the Rio Valley in 1965. Only two years into Stoner’s promotion, the Whataburger family endured a great tragedy. The innovative founder, Harmon Dobson died in a private airplane crash in La Porte, Texas. Grace, Dobson’s wife, became the Chairwoman of the company and turned to Stoner as one of the most tenured employees in the company for support. His new and evolving collection of duties would eventually bring Stoner back to Corpus Christi along with the title of Senior Vice President.

Though it’s been 30 years since he retired in 1992, Stoner is still held in great esteem by the employees of Whataburger as well as the Dobson family. During the company’s 50th anniversary year, the company said the following of Stoner and his legacy, “nobody ever came so far or took such a big chance with the company.”