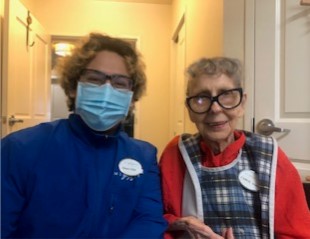 She initially spoke to Mendoza in Spanish but was disappointed to learn that, despite his Hispanic heritage, he had never picked up the language. From that moment on, she was determined to teach him and insisted that he come by every day for a brief lesson.  Mendoza has been learning the Spanish language little by little and day by day thanks to Kilgore.

Each day Mendoza stops by Carol’s room where she has a Spanish word of the day prepared for him. A natural teacher, Carol can’t help herself from sharing her passion for the language with those around her. She even hosts a Spanish club where her neighbors attend to expand their Spanish vocabulary.

What began as a simple exchange has quickly developed in this unlikely pair becoming fluent in the language of friendship.